Since the Blade Runner 2049 movie came out, I am a bit surprised at the general lack of merchandise for what had promised to be a huge hit. Sadly, it flailed at box office, but is a gorgeous piece of cinema. I’ve seen it thrice and now it will go to video where I hope it finds its true audience, like the original did.

But NECA did create two vehicles from the film, both are K’s Peugeot spinner, in two different scales. In this article, I focus on the smaller one, which is to scale with standard Hot Wheels cars (1:64) and the ERTL Spinners from the 1980s.

In a previous article I talked about how I converted the ERTL Deckard Ground car from a brown hunk with a logo on top to a fairly accurate model of the real deal (using reference photos for color and detail).

Two weeks ago I took a model railroad figure (I bought a lot of them in bulk some years back for this purpose) and since they are too large for the scale, I cut the legs down (which also usefully made the suit jacket seem longer) and made a K figure, painted it up, and glued it to a CanDo Tank Display Case.

Here are the results, shown next to my previously-mentioned Deckard Ground Car reno, and the Hot Wheels Syd Mead Limo 1000 concept car. 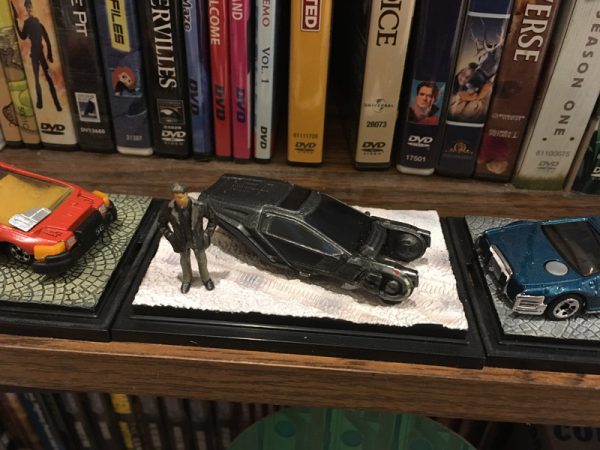 The spinner is quite nice, but the one complaint I have is that it has no visible interior. While cars this size have no great detail inside usually, it is at least desirable to show an interior. This would have been nice. Rather, NECA saw fit to paint on a fake reflective blue wash that is supposed to fake glare. It fails. But the rest of the vehicle is quite nice, and even has a springy rear wheel, which was a nice and unnecessary touch.

Here, I show the three side-by-side-by-side, backed by one of my most prized possessions, a copy of the Blade Runner Sketchbook gifted to me while I was in college by my friend Todd Wareham, who I’m sure never knew how valuable a gift it would become. This book is a rare gem.

Note that I did not do anything to the car itself, but the figure is entirely customized from a set of 1:50 (too large) figures I bought several years ago for customization. I have used other figures to stand in for Simon Templar for the white Volvo P180 Matchbox released a few years ago.

This is the figure before I cut down the legs: 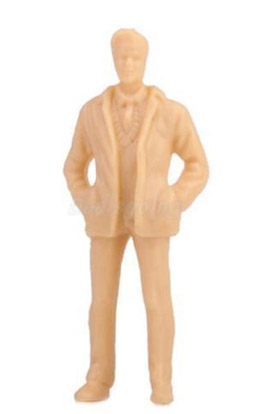 Then I primed it and painted it with craft paints. 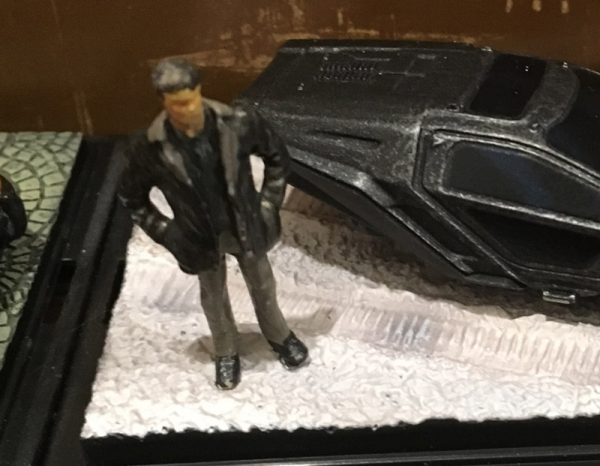 Sorry for the blurry picture. I think putting it on a snowy base was a prime idea.

Each display base comes with a plastic box cover but I left them off for visibility.