It’s rough, but if you want to play a very early not-ready-for-prime-time version of my HÜVER game, here it is. 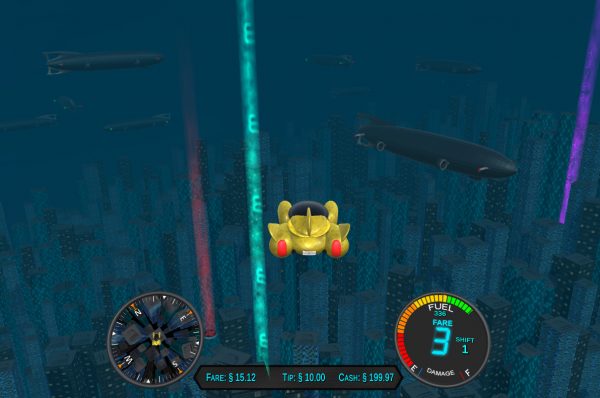 It’s a .RAR file, so you will have to unpack it. You can unpack the whole directory anywhere, and then run the Rolling Ball Physics Tutorial A.exe.

Win 10 may warn you about running software you downloaded… Unless a Unity build adds viruses, you’re safe to run it.

There is a READ_ME.txt file. I’m also posting it here:

Yeah, the executable is called Rolling Ball Physics Tutorial A because I started this project as a rolling ball game, but also as a tutorial, since it was really just to get the ball rolling.

Early last year, while doing a lot of learning about the Unity Physics system with a rolling ball game idea I came up with more than a decade ago, I tried to make the ball jump, so it could avoid traps on the game board. Instead of making it jump as an impulse, I accidentally made it jump on an Update loop, so it gave an upward force every frame, rather than just the once – and suddenly my ball was hovering above the board.

I thought – wait… this is already way more fun!

So I pivoted entirely towards a flying car game.

Space Taxi is a Commodore 64 game that was hugely popular back in the 80s and early 90s. It was a 2D physics flying taxi game that had challenging levels, and the aim was to pick up and drop off passengers while preserving fuel, making money, and not getting yourself and your passengers killed.

It seemed natural to make an homage to that game.

This game is currently in development, a few hours here, a few hours there. This is the result of about a year of that kind of involvement. So yes, at this stage, there is no sound, there is no way to save a game, but these things will be tackled next, if I can.

The game requires an XBox 360 USB controller. I bought mine cheap at Game Stop and it really works nicely.

The controls are laid out at the start of the game, but here they are:

Left Stick – Forward and Backward. Later, Left and Right strafe (but you have to earn that)

Right Stick – Forward for Up and Backward for Down, for hüvering. Also Left and Right for turning.

Left Trigger – Turbo (but you have to earn that too)

B starts the next shift

Left Joypad – Up/Down tilts the camera. A button resets it to default. (I find the default angle of 45 degrees to be quite good, but you may want to update the angle of the camera when first searching for Passenger Pickup/Dropoff Pad Beacons across the city

At the end of each shift you may be able to purchase upgrades, if you have enough money. A few are free. To select, use the Left Stick up and down. Centered will select the middle of 3 upgrades.

At first, flying is done using the Right Stick for up/down, and turns. The Left Stick is for forward/backward. This may seem counter-intuitive to some, since you may expect turning to be on the left stick. But it becomes very obvious once you purchase the Strafe Control that you really want the Left Stick left/right to strafe, since it gives the car a complete plane of control when landing.

But you don’t get Strafe right away.

Be gentle on landing and avoid hitting buildings. You can damage the car, and that can cause a crash (and therefore a §500 Deductible penalty) but before you crash, every bit of damage reduces your tip, as passengers dislike being shaken up. If you happen to collide with an airship, you may bounce around a bit, but you won’t take damage, but your passengers will get upset and lower your tip.

Passengers are picked up and dropped off at Passenger pads that light up with blue beacon beams when they are the next target.

Your fare begins with a fare amount based on the distance to the pad from the previous pad’s position. Add to that a standard §10 tip which will reduce if you jostle your passengers too much.

You can fuel up at any Service Station (red beacons) or your Hüver Home Base (purple beacon). While fueling up, you will also automatically be repaired, if you have taken any damage. Both recharge and repair work take time. And in Hüver, time is money. Fare continues to go down while fueling up, so don’t waste time getting more gas than you need, but do fill up if you still have a lot of fares to go, with low fuel.

If you fill up at Home Base, gas is half-price. Repairs are half-price. Fill-up and repair rates are also much faster, so you save money in two ways.

Your Shift is composed of a number of pick-ups and drop-offs. Find the Pickup beacon and land on that pad. After the timer ring counts down and the beacon disappears, take off towards the next lit beacon.

At the end of a successful shift, your car will fill up and all repairs will be completed instantly at Home Base rates.

At the end of each shift you will see 3 possible upgrades. Some are free. If you do not have enough cash to purchase the upgrades offered, a red indicator will appear, meaning you cannot purchase at this time.

If you can afford an upgrade, select it by using the Left Stick up/middle/down, and hit the Y button to purchase. There is no confirmation screen, so if you hit Y, you bought it.

Then hit B to start the next shift.

There is currently no sound. That’s coming at some point.

You may see airships blip into view for a frame. That is an animation issue I have to fix.

The game does not allow saving your progress. I hope to add that at a later date.

My “fuel” paradigm began as gas, but I’m now angling towards electro-pulsers which need charging. Forgive the inconsistencies there until I can fix them.