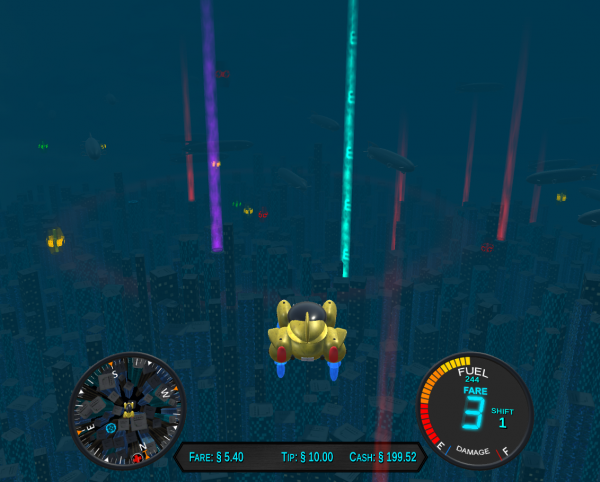 The last real game feature, other than saving the game, was Powerups.

These are floating objects that give gifts if you collide with them.

The Powerups appear randomly over random buildings, and have a lifespan. During the lifespan, the color of the Powerup fades, until you can barely see it. But as long as it is there, you can still hit it.

Each has a cylindrical timer gauge. This starts at the height of the Powerup capsule, and begins to shrink. When it becomes a flat disc, the Powerup disappears.

The gauge will let you know how much longer the Powerup will be around, so if you see a distant one with a short cylinder, don’t bother, it may be gone by the time you get there.

Currently I have 3 kinds of Powerup:

Each Powerup type has 4 intensities. The lowest gives out the lowest payoff, while the highest, the most.

Each one has the icon of the type of Powerup, and rotates at a faster speed, the more valuable the reward.

Each has its own collection sound when you successfully collect its reward, and the sound volume is louder for more valuable rewards.

It also creates a metallic sound when created, which will give you an idea how far away new ones are, because of the volumetric sound which fades with distance.

A week or so ago I put out the call on facebook for any of my friends and family who wanted their voice in my game to submit sound clips which I would put in.

HÜVER is an homage to a beloved Commodore 64 game, Space Taxi.

In it, you fly a taxi around a maze-like level, with a number of landing pads. A passenger appears at a random pad and yells “Hey, taxi!” (One of the first games for the Commodore 64 that used digitized voice clips.)

You fly to the passenger, land, and he climbs aboard and tells you where he wants to go, “Pad four please!” Then you take him to pad 4 and he gets off. Another passenger appears randomly, and so on.

But since my game is more of a touch-the-pads-in-order game, you don’t actually pick up a passenger on a pad, you just go to the next pad. “Hey taxi!” seemed less useful.

But I thought of a way to use it anyway.

Currently when a new pad is ready, you will hear one of my friends say “Pad Four Please” depending on the pad, from 1 to 9.

The initial fare is decided based on your distance to the target pad. And the fare begins to count down immediately. The longer you take to get there, the less fare you earn, so you are incentivized to get there as fast as you can.

So I decided that when you reach half of the initial fare, the same friend who called you now says “Hey taxi!” as in “What’s keeping you!?”

This is a link to a ZIP file with the latest playable game – 64Meg.

PLEASE NOTE: THERE ARE A COUPLE OF BUGS OF COURSE.

Mainly, resetting the game (setting you back to default state) doesn’t appear to work in a build, yet it works perfectly in Editor. I tried two approaches, and both fail on a build, work in Editor.

So if you want to restart your game, find the file at this path and delete it.

(It’s called Rolling Ball Physics Tutorial because that’s how this project started out – as a learning exercise, rolling a ball around, painting floor tiles.)

You need only a PC that can play Unity games (and you can set the quality, so a slower PC with a bad video card can still play) and a USB XBOX 360 controller like the one that you see in the starting screen.

Unzip this file somewhere, and you should just be able to go to the unzipped directory and click on Huver.exe

I added Game Saving/Loading. It meant saving a LOT of variables, and the easiest way for me to do that is to make a variable object and save its entire set of properties to a JSON file. I wrote a Save method that pushed every relevant variable into a single object, and saved that object to a JSON.

Loading does the opposite. Loads the JSON and moves a bunch of variables around to where they belong.

Other than that, it is a perfectly playable game, and I think fun.