With a 3D model, many possibilities present themselves. For example, you can take the actual rocket body model mesh and invert it to make a holding receptacle that will fit it exactly, in any countour. So I decided to make use of the heat-sink vanes on the side.

I modeled a holder that one of the vanes would slot right into, and on an angle that looks optimistic and impressive, I needed some way to hold up part of the rocket’s weight, so, again, using the model itself, I made a shoe that I could fit the butt-end of the rocket into.

I modeled up a first attempt, using the front arm of the rocket as a base model for the two supporting arms. They printed rather a bit thinner than expected, and the rear one broke from handling. It was too thin.

Note: I modeled it in ugly yellow because I have a full reel of that, and I really dislike the color, so many of my test parts will be in this ugly yellow: 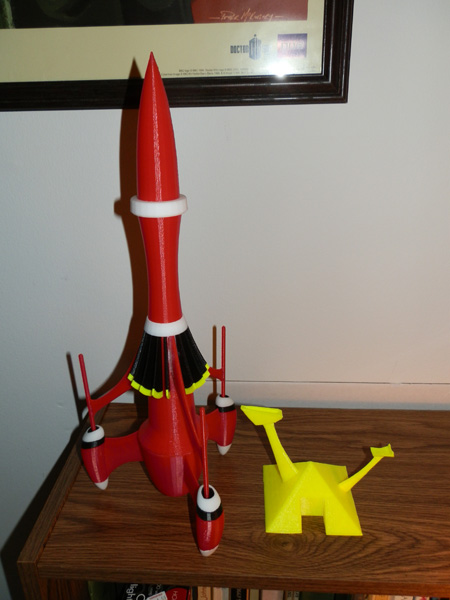 As you can see, the front shoe holds one of the side vanes snugly – but not too tightly – I modeled in a bit of room – and it could be any of the vanes, so the angle I hold it at can be changed; and the rear shoe has a little tab to hold the butt weight so it doesn’t slide backwards. 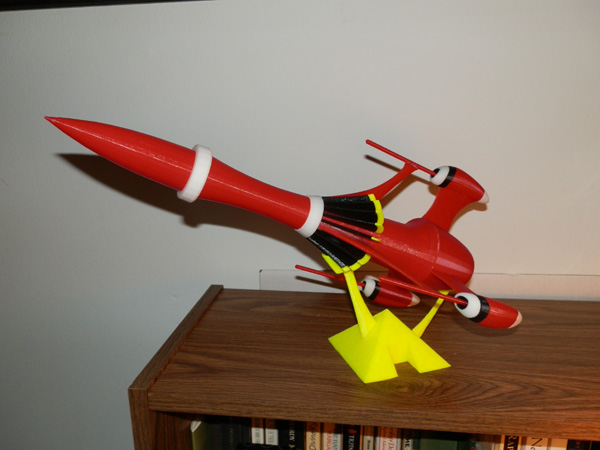 This was a prototype, so I didn’t model the shoes to fit with the arms, knowing that later I would. This was to test the concept – could it hold it firmly? Could it support the weight? Would it fall over? Was the center of gravity ok? 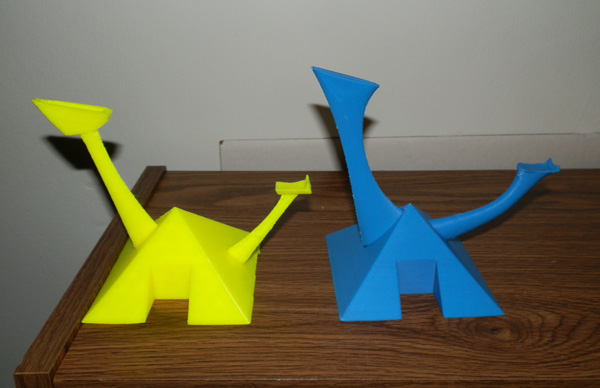 Here is the original prototype next to the final modeled version. I modeled it in blue because several model kits I have had modeled their bases in blue, and as it is a nice color not included in the printing of the rocket itself, it stands out as more neutral against the rocket.

You will notice the weight-supporting arms are much thicker and the shoes have been made part of the arm design.

So what of the base itself? Why a pyramid?

That’s my new logo for my 3D printing hobby, and business if it comes to that. I’ll make a post on my logo later. But for now, suffice it to say I needed a broad base to hold the rocket without danger of falling over, and I thought my logo would be perfect for the job.

Here’s the rocket in its final stand: 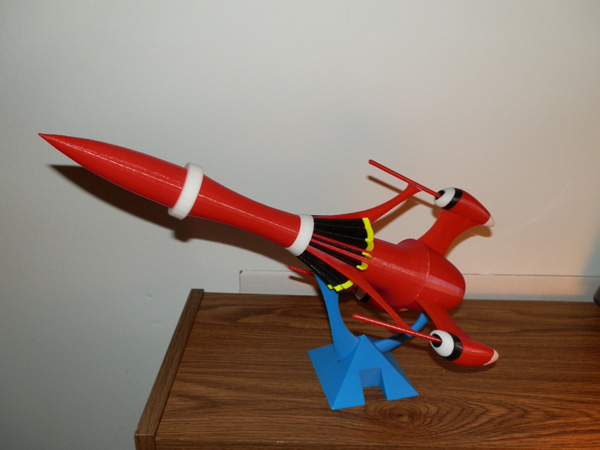