I found these strange flower pens at Dollar Tree. The strange thing about them was that they were tall green pens with plastic/rubber flowers on the top, attached to a wind-up motor. Wind up the stem and the flowers spin. Except they didn’t, because the rubber flowers kept hitting the pen stalks, probably why they ended up at the Dollar Tree.

However, I was able to salvage the wind-up motors from them. And these were ideal for several uses, and I bought up as many as I could, and tossed those that just failed to work.

Based on the configuration of this motor, I was able to create the Weather Tracker.

I wanted it to look like some Adventure Team gear from the past, most obviously the Seismograph, and the Sample Analyzer. 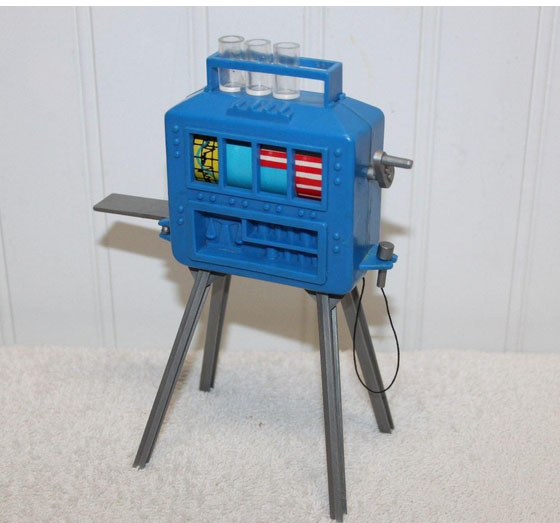 Because of the shape of the motor, I was able to use the winding stem to attach a radar antenna/knob you could rotate to wind it up.

Meanwhile, the output shaft could attach to a barrel cylinder, inside the body, which spins like crazy with a graph on a paper sticker.

I tried various colors and ended up going with a color scheme close to the Seismograph I was influenced by.

I started by creating a 3D model of an ideal unit, which I then adapted to fit the motor, and changed elements for practicality and aesthetics.

To give the user access to the motor in case it stuck (it could) I made sure the top plate was a separate piece, and the motor slotted into that part, with a screw to keep it in place.

This slotted smoothly into the base unit, which itself had several parts of different colors to accent it, including individually printed colored buttons, and a side vent.

This Weather Tracker used 3 individual stickers. A tiny strip for weather graphing, an oscilloscope-type screen, and a long strip for the barrel cylinder, which had linear line graph segments.

I added some detail to the body for interest.

The base is a spring-loaded clip that became the standard attachment system for the RACCS.

And you can really fit a number on there.

A blueprint/instruction sheet accompanied this toy. 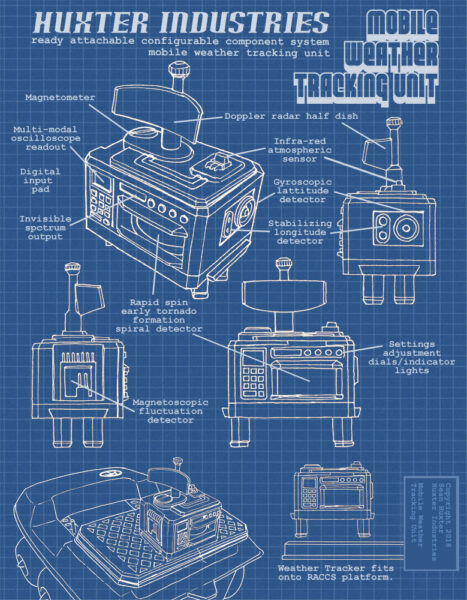