For a while now I have been wanting to create a board game and use my 3D printer to create the pieces, at least for player markers, but ideally, an entirely 3D printed game.

And for a long time I have been fascinated with hex-grid games. I knew I wanted my concept to work on a hex grid. Better, I chopped each hexagon up into triangles, so it’s actually a triangle game played on hexagonal game board sections.

I wanted to use the idea of building a pathway on the board, and immediately I thought of the old Text Adventure “The Colossal Cave”. I began drawing out sketches for board pieces and what features the game would have.

This was my preliminary sketch: 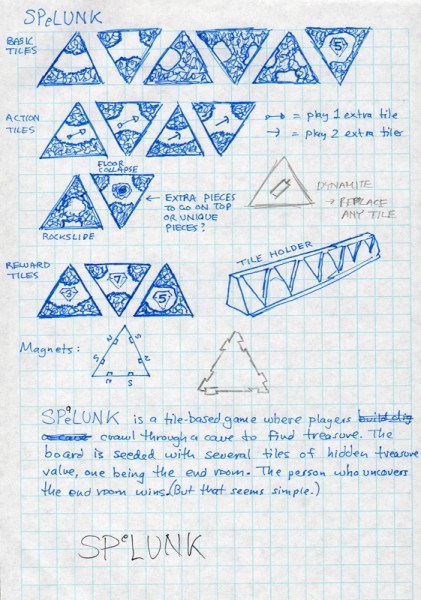 This one sketch covers a lot of ground. It not only describes the basic premise for the game near the bottom, it creates the game name and logo as well, and even discusses a couple of ways to create the pieces.

As for the pieces themselves, they show a fairly detailed set of pieces, most of which actually ended up in the game, or at least in some form.

I wanted the pieces to be triangular, and they needed to link together on a table to form a path, and could get quite dense. I thought I’d use micro magnets (I have a lot of those) but it would require six magnets per piece. Then I thought of puzzle piecing them together. Not terribly practical.

Then it hit me. I have a Deluxe Scrabble game. The board is not like the folding cardboard board from the standard edition that so many people are familiar with. It has ridges on the grid leaving each piece recessed so when you lay a piece, it does not move: 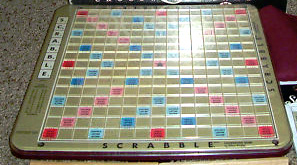 Perfect. I would print board pieces with ridges to keep the pieces in place. And since I couldn’t print the whole board as one part, I actually was forced to create a board that was more flexible than I had even intended originally.

I would create hexagons with 24 triangles in each piece. Each piece would then be connectable to each other by a puzzle system. Underneath each one is a butterfly shaped recess. I printed butterfly-shaped connectors so any board piece can connect to any other. 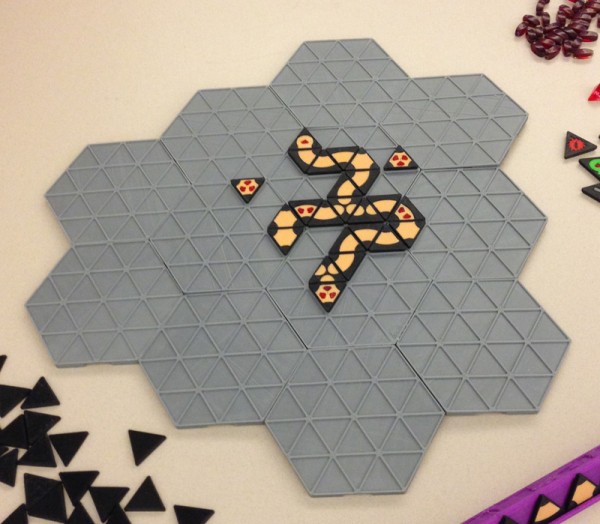 Here I show 12 sections connected into a triangle shape. But the great thing is the players can decide on their own exactly what board layout they want to play on.

You can also see by this picture that the pieces are 3D printed in two colors (or more) and include tunnel pieces that connect two of the sides of each triangle, or 3, and some block the tunnels. (I later determined through playtesting that the blocking pieces had no actual effect, so I eliminated them.)

Some pieces, you will note, have gems (red inserts) that are scoring pieces. Note also the red crystals at the top right of that picture. Those are the scoring markers, and when the game is over, the player with most of those gems wins.

I printed piece holders much like Scrabble holders too, in several colors. Those had to be puzzle-piece connected because my printer could not print them in one run.

Before culling some of the pieces and changing things around due to playtesting, this is a photo of the pieces used in a single game: 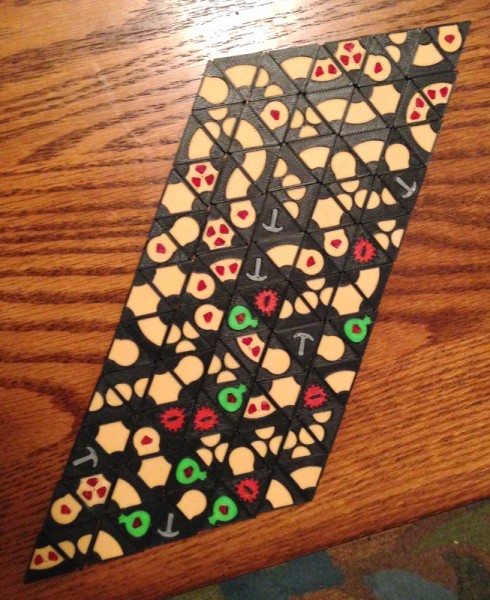 I also printed instructions with illustrations. The pieces I ended up with are, with a total count of each:

Arbitrarily, also, players can add more pieces (my game will include extras) so they can customize gameplay at will.

Above, you see the tunnel pieces, then tunnel pieces with gems (for scoring). Then the Cave Entrance which is the first piece layed in gameplay, and all tunnels lead off from this piece. Then we have the Steal piece (green bag with gem) which allows a player to roll a D4 die and steal that number of gems from any player (or players). The Pick-Axe gives a person an extra turn. Dynamite allows a player to remove an existing board piece and replace it with one of his own, and then play any second piece he’d like.

The four different blue gems are placed on the board in turn before gameplay by the players, upside down (there is a ? on the back) so no player knows what they are.

During play, you build tunnels on the board with the aim of reaching the 8 blue pieces. When you reach one you reap the reward or pay the piper. Most of the pieces are beneficial, gems, free turns, steals, but one loses you a turn.

Here is a recent shot of the game I took for the back of the box:

I have been playtesting it and a lot of the changes that came since the first design are thanks to some excellent suggestions by playtesters which have helped the game immensely.

Here my friend Matt enjoys (or pretends to enjoy?) a playthrough of SP’LUNK. 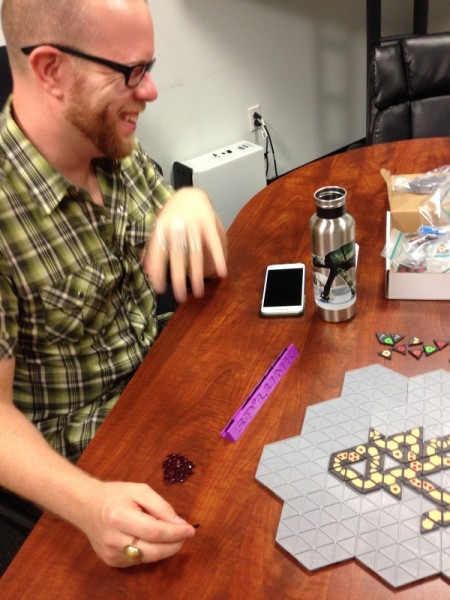 I also created a box out of an Afinia filament box, and create labels for it. Here is the cover: 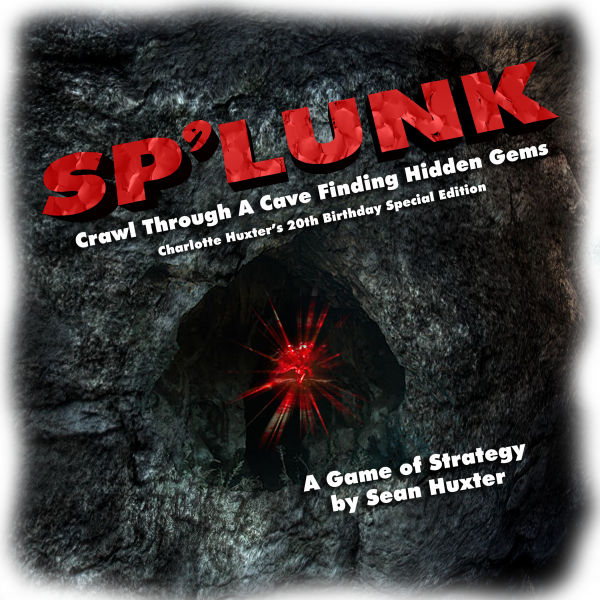 This version has a special sub-title, as it was a gift for my daughter on her 20th birthday. Her friends have played SP’LUNK and they seemed to like it so I gave her a copy, hoping they would play and perhaps suggest even more excellent alterations.

3 thoughts on “SP’LUNK! A 3D Printed Tabletop Board Game”