Last night I printed six things on the printer in a single print. This isn’t a bad idea. But as an experiment I printed them on the blue masking tape. These would be tall objects, or at least two of them are very tall, but four were moderate, and they had all printed before without issue.

Last night, however, when two items had finished (the shortest) and the two medium items were five layers from completion, the print head knocked one over into the other, ruining the print.

Tonight I printed the four spoiled items again. And though I used the bare perf board, the engine pieces knocked over again!

I’m not sure why. These are items that, as I have said, printed fine before. Perhaps it’s the fact that I’m printing multiple items. I’m now going to attempt to print them individually, because these are the last four parts I need for my rocket v1.0 to be fully ready to assemble.

Here’s an image of what I got when I got back to the room, and shut the print down: 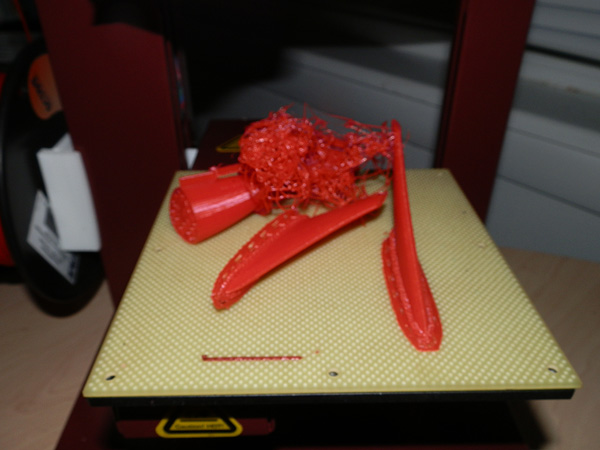