A simple name, but I wanted to create a rocket based on the shapes I used in a demo video I did in 1994. In that video I had space fighters attacking a battleship. The rear section ended up looking a lot like the rocket you see here. I also wanted to stray a little bit away from the standard colors for a rocket, and experiment with green instead of red with the more standard white, black and silver color schemes. Even then I caught myself putting a touch of red in there: 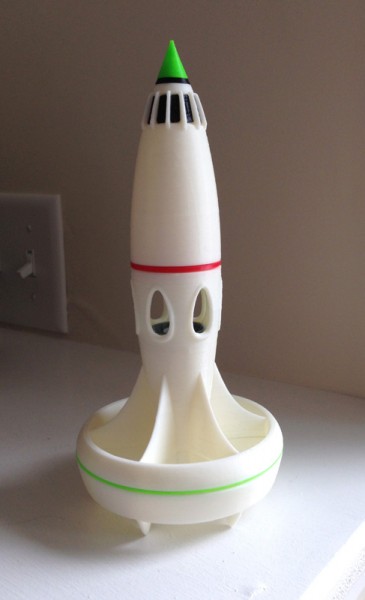 It is interesting to note that I originally wanted a green stripe around the solid ring at the rear, but I abandoned that idea in favor of printing that entire rear section, fins and ring and all, in one print run. This turned out to be impossible based on the arced curves. The printer needed something solid to raft up to, and this shape was not providing anything. So I sliced the ring where the green stripe appears. Then my printer warped a bit while printing, warping up the connecting seam to about a millimeter in difference, which is something that happens with my printer on large base area prints. So I took the opportunity to model a thin stripe. I actually like it.

The rocket stands on those six “feet” molded into the fins. A keen eye can see a green cone inside the air intake chamber. This forms an inverted cone to match the nose cone, which sits right above a familiar engine piece, which I have used in several previous rockets.

The air intakes are for atmospheric travel, using the turbine engine. Interstellar travel uses an internal air mix, so the turbo intake is only operational in atmosphere. 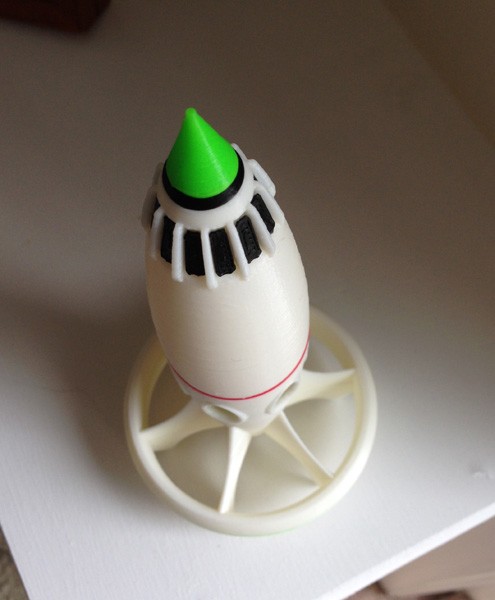