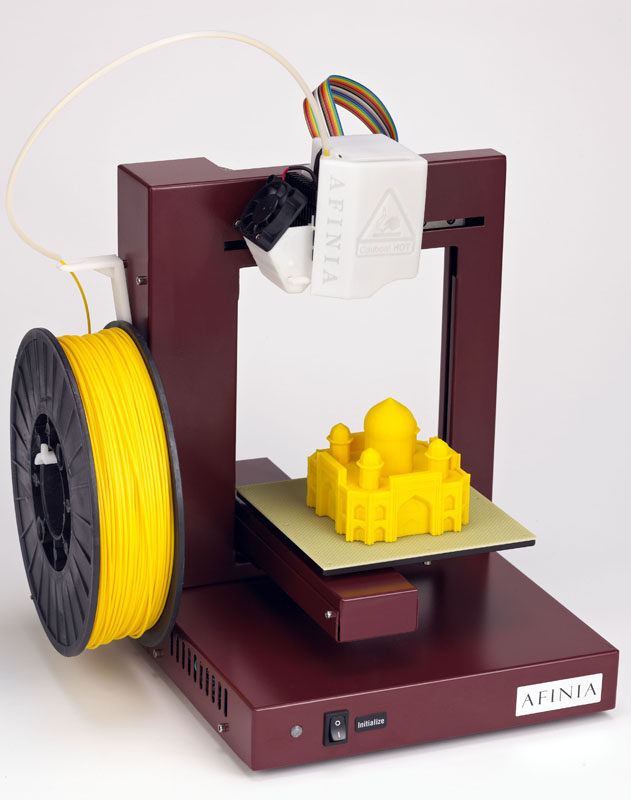 My interest in 3D printing began several years back when the current game project I was working on was in mid-development, and not yet released. Lord of the Rings Online was not yet shipped, and we were working away when one of my co-workers and friends pointed me to a web article about 3D printers being used at MIT, and I was fascinated. There were various ways to print something in physical space at the time, but they were extremely expensive, but nonetheless I was excited because the article kind of led us to believe that this kind of technology would be available at reasonable hobbyist prices in the next few years. Being known as a collector of lots of plastic (toys, collectibles, etc, in fact my desk was a tour stop on the Turbine tour because I had 5 shelves full of the coolest stuff you can imagine) I was of course excited at the prospect of being able to make my own “stuff”.

Another co-worker and very good friend of mine at the time said something along the lines of “Oh, great. More junk to toss in a landfill.”

Well, perhaps some people would print a lot of junk. I planned to print cool things, even if I was the only one who thought it cool.

In the last two years, the MakerBot has become a well-known hobbyist machine, and for under $3,000 (about the cost of an elaborate computer in the 1980s when I was first computer hobbying) it brought 3D layer printing in ABS plastic to the home hobbyist. And since then, the industry has sort of boomed. There are many printers now that can print 3D layered objects. Many of these are, themselves, a hobby. You buy the kit and build it. I’ve seen the results. Not always great.

So I kept my eye on the market and two promising printers showed up:

About 8 months ago, I guess, I bought Make Magazine’s special edition on 3D printing in which they pitted somewhere around a dozen different home-priced 3D printers and ranked them. I read through those articles, saw the test prints, and they ranked the Afinia H479 their “Best In Show” for various criteria. Where they lost out was on speed. But when I think about it, speed is not that important for the patient. Where they really won was in accuracy and precision. And in ease of use. It is touted as one of the first “out of the box” printers you can just plug and print.

Around the same time I heard of a Kickstarter campaign for the Form-1 . This excited me too, because the printed item is made of resin (which interested me because I mainly want to print garage hobby resin model kits for hobbyists, such as a Space 1999 Moonbuggy, or space ships I design myself.)

I looked into the Form-1 and I found that while the process is fascinating (it actually prints using a laser which hardens the liquid resin on a flat surface that’s lowered into a shallow tray of resin. It hardens a layer onto this surface, and lifts it slowly out of the tray of resin, printing layer after layer, and you see the whole thing rise up upside-down out of this shallow bath of resin.

If this wasn’t magic, then it was close enough! And look at these results! 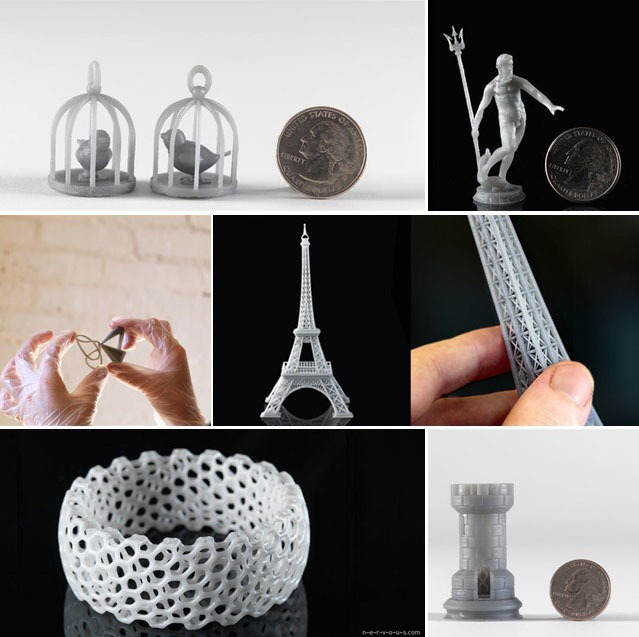 Don’t get me wrong. I WANT THIS PRINTER!

But it had its problems. First, the Kickstarter campaign indicated they were some way off from production. And the cost was about double the Afinia H Series printer.

And there was word that they were being sued for patent infringement . Not sure how that’s going either, but it lends uncertainty to the project.

But the printing results speak for themselves.

Here is a side-by-side sample of the two methods of printing. On the left is a small item printed in ABS layers, and on the right, the same 3D model printed on the Form-1 with laser-hardened resin process. (Not sure which actual printer printed the layered version. They just labeled it “Low Cost FDM” which is another print material and process.) 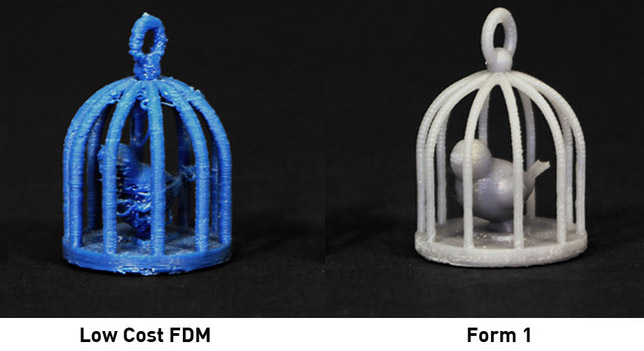 But for now the Form-1 is out because it’s not shipping yet, and is a bit too expensive. Also, the special liquid resin required to print is very expensive, something like $140 per liter. Now a liter sits in a shallow tray and can print a lot of items, but it would still make for a very expensive per-object cost. I think I’ll want one of these when they’re at market and the prices drop a bit.

So I investigated the Afinia H Series .

Afinia was good enough to offer to print me a sample item if I sent them an .STL file (standard file format for 3D printing.) I wanted to see how feasible it was to print a Space 1999 Moonbuggy so I downloaded a model from the internet just for testing purposes. Meanwhile I began to model my own. But for now this would do.

The model was NOT optimized for 3D printing, and I sent it in without alteration. I expected the worst, but what I got back actually surprised me. You can read about that in my previous entry, here.

They also sent me a sample print of a Taj Mahal that they do, and I was pretty sure this would be my first 3D printer.

At a price of $1599 I figured this would be my starting printer.

At the time I just got my tax refund back, and got a bonus from work, and had enough money in the bank to outright buy this printer. But with Charlotte’s college coming up rapidly, and who knows what costs ahead, we figured it would be smarter to keep that money in the bank. So I had a plan.

Each year at Christmas I usually go through my collectibles in storage and sell a few on eBay to make some extra money to buy the family Christmas gifts. I decided I would make the purchase of this printer a project. An eBay project. I would sell enough of my collection (things I didn’t cherish as much) and try to raise enough money to buy this printer outright. I knew it would take some time. I figured if I began auctioning in January, I should have $1600 by April.

I began auctioning the big ticket items first, items that would bring in over a hundred bucks and my PayPal account began to grow. Then I found a few things on eBay I wanted myself, and it shrank a bit, but not much. I kept auctioning, and the account began to grow. I wrote a spreadsheet to keep track of all my eBay auctions and the totals, the shipping costs, and the net result, and had a little window for how much I had left to go towards the Afinia printer.

Then in late March Charlotte and I were involved in a car accident that totaled my van and took me out of auctioning for a few weeks. I had too much else to concentrate on to be selling things on eBay, which is a hobby in itself. So I was delayed.

But when I bought a new car and finally took possession of it almost a month later (long story) I got back to selling.

Since January I sold over 115 items on eBay, and made $2300. As I said, some of that money had to go elsewhere. But I declared victory around May 25 when my PayPal account had reached over $1700. Enough to buy the printer and ship it.

Earlier this week I was about to pull the trigger. $1599 plus $40 expedited shipping for the printer and one reel of premium plastic, as well as a set of tools to help in the printing process.

But I looked around the internet for coupons and deals, and found that for $1650 I could get all of the above (shipped from Afinia’s warehouse, so it’s the same product) but add to that a set of knives (not expensive) and a heat switch (to lower the heat of the print head for some reason) but most importantly, three reels of filament in my color choices. Each reel of lower-quality filament usually runs $33 or thereabouts. So this was a great opportunity to get some extra colors off the bat. And one company was shipping $500 or above orders for free.

I ordered. Now I await the printer, which is grinding its way slowly to me by UPS Ground.

When I get it, I will begin blogging about it hopefully excessively. I will have to design a whole new page for it.

This is what an Afinia can do in the various colors of filament they sell:

One thought on “3D Printing is About to Begin!”