My printer is back from the shop. It was three weeks to the day since I sent it. And it’s working.

I tested it by printing a small 1:6 scale Space 1999 Stun Gun for GI Joe. Just a quick print. No cleanup or optimization so it wasn’t perfect. I also found that at 1:6 size, it’s a bit small for a GI Joe hand. Will have to try 1:5.

But I began printing the real parts for my first prototype test print.

Here you see the setting switch housing and switch. The model of the gun I have shows the two colors under the switch as dark brown and red for STUN and KILL. I don’t have a dark brown, and I don’t want to use black. Besides red and green works.

For this test print the red and green are just thin sheets. I will hopefully eventually carve the words KILL and STUN in them and print those in white.

The slider works nicely. But it’s a bit loose. I’ll have to print a few of those before I get it right, I’m sure. Also, I intend to put a magnet in the slider, and one under each of the colors so the switch will be drawn to the correct position for both STUN and KILL.

Here you also see the four gun barrels, two nubs that are at the top of the gun, and the handle pips in green and red.

Here is the 3D model, with most of the work finished. I just have to etch out holes for the magnets now. 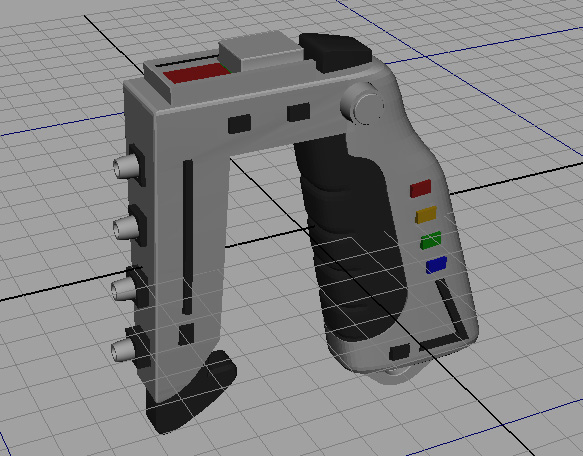 Here are all of the parts printed. I kept the black parts on the rafting to keep track of them. Some of them are similar but not identical, so keeping them in this layout helps me place them.

A while back I bought some rare earth magnets. Very strong but tiny. I decided to put magnets into the slider and under the slider so the sliding switch itself would be attracted to the two switch positions.

I cut holes in the model to accommodate the magnets and attached them to the gun. The attraction is weak from a distance though, so it doesn’t work as nicely as intended for this first prototype. 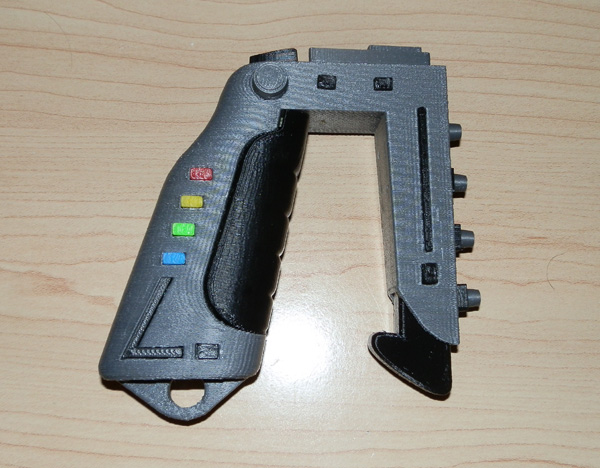 This is a photo of a prop. There are many versions of them, so I’m not sure how accurate it is, but you can see I’ve got it pretty close. 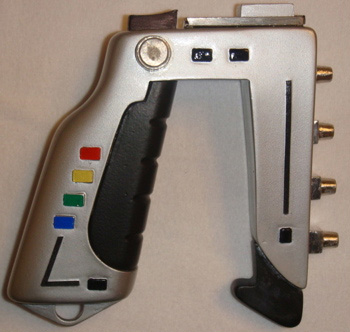 I forgot to cut holes for the two upper pips, so these are just glued in place. Also, the front barrel appears to be too short. I will have to check some other models and make adjustments. It’s shorter than my resin model. But it was modeled using a photo of a prop from the internet, so I don’t really know which is more accurate.

The magnets are powerful when close together but weak when far apart. The sliders work, but the attraction can hardly be felt. I’m probably going to go with bigger magnets that I have.

Otherwise for a first attempt, it’s not at all bad.