For the moment I can’t print a 3D model from my iPhone or my iPad or other mobile device.

However I have found a couple of ways that an iPhone or iPad (or mobile device) can be of help in the print process.

After one reel of filament failed me (it was inconsistent in thickness, which happens rarely, but is not unheard of) 2 hours into a 5 hour print, clogging inside the extruder head, I felt I needed some way to monitor the printing process without having to run up and down the stairs every few minutes. Normally prints just work. But I still feel the need to see the progress just in case bad things happen.

For example, during a recent print the scaffolding supporting a part of the model that stuck off into space cracked and fell over. I saw it in time to pause the print, superglue the scaffold back into place and rescue my print.

So I felt I needed a Nanny Cam for my printer. I went looking for something to fit the purpose. I found iCam, which runs server software on your computer which takes the output from your web cam and plays it on your iPhone or iPod.

Before this I had built a fume hood for my printer. Later, I printed an armature for my web cam that could be snapped to one of the upright struts on my fume hood.

It’s designed to fit the Logitech Pro 9000. The tail fits into the square cup, while the rounded cuff fits around the upright strut of my fume hood:

Now I can monitor my prints at any time on my iPhone and my iPad. 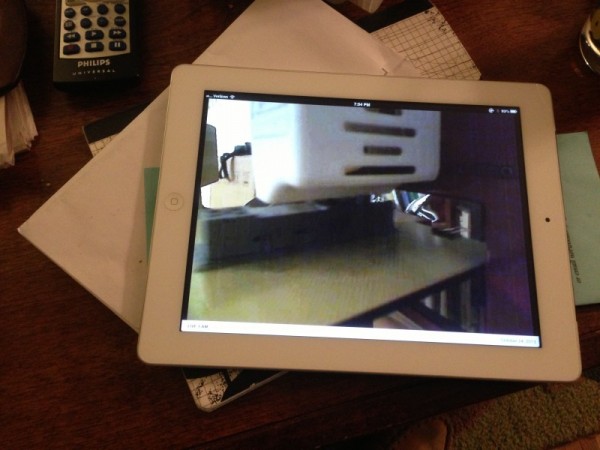 So now I use my Nanny Cam (as my wife coined it) to keep an eye on the print without having to run up and down stairs all the time.

The one thing the Nanny Cam can’t do is tell me how much time is left in the print. I thought of hooking up a second web cam to just monitor the count-down timer on the Afinia print software, but duh… iPhones have an app called “Clock” which can be used as a countdown timer.

So I use that.

I set the countdown timer to a few minutes before the print should end (by Afinia software estimate, which is usually fairly accurate.) That way I can be in the room when the print ends so I can be there to set up another print immediately.