Since my second 3D-printed Adventure Team set, the AT Remote Drone Surveillance,was completed a couple of weeks ago (see the post here and the photo story) I decided that some Joes would want to carry along a Surveillance Drone without having to have the ATV or Trouble Shooter handy. 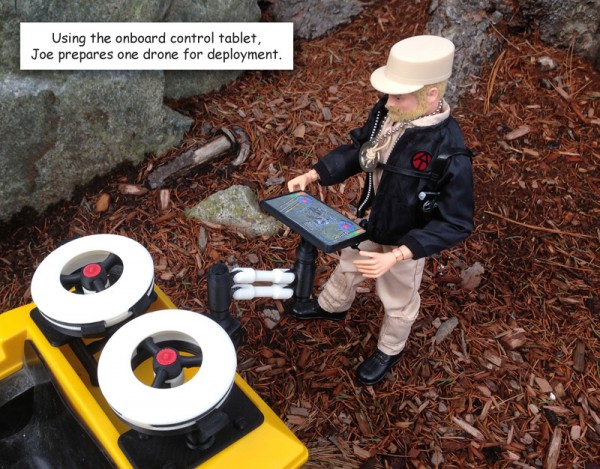 Having these mounted on an ATV is fun, and allows me to add an armature carrying a control tablet so Joe can stand next to the ATV and control the whole operation.

Two drones are nice, but sometimes you only need one. And the best way to carry it would be on a backpack. These drones are lightweight but large and cumbersome to carry.

So I designed a portable version of the drone with backpack that had multiple purposes. (Note: There were no changes necessary to the drone itself.)

First, it allows Joe to carry a single drone and control tablet wherever he needs to go on foot.

Second, it removes and acts as a launch pad, with legs to set it on the ground.

Third, it is a solar charging station. The solar cell absorbs the sun’s energy and powers internal batteries that charge the drone when it is attached.

It stores the control tablet for convenient carrying.

I designed this to be very much like an original Action Pack GI Joe set. I printed it in orange and black (mainly) which are traditional Adventure Team colors, and the solar cell is in blue because most solar cells do tend to be blue.

I used 1cm braided elastic for the harness straps, and printed the harness chest piece, the strap clasps and strap adjusters.

Here are the main parts, printed. 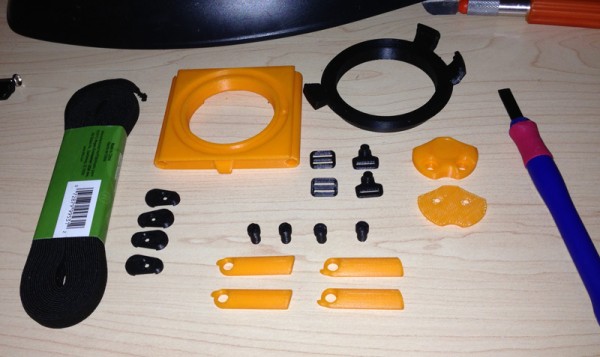 Seen in this picture is the main backpack frame, the drone carrying and charging cradle, four strap connectors for the frame, four legs, four leg bolts, two strap adjusters, two harness clasps, and the front and back half of the harness connector.

Here we have the solar charging cell, the control tablet (seen from the back – the front will have a paper insert) the charging cradle, and the backpack, partially assembled. 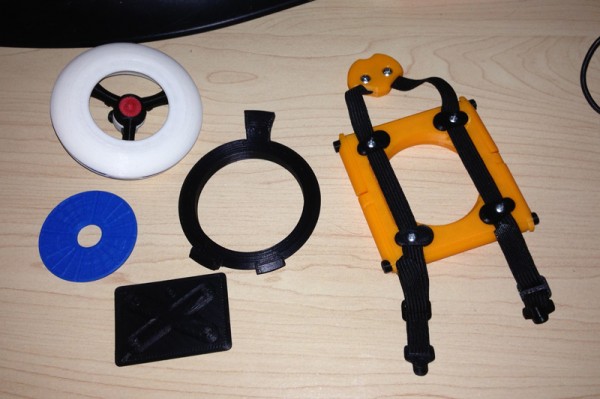 One main thing I wanted, especially after experimenting with a hard printed harness for my GI Joe Adventure Team Action Pack Flight Pack, was an elastic strap, like some older GI Joe sets. I found that 1cm elastic worked well, and I could melt the cut ends to prevent fraying.

My main concern was that I didn’t have to sew anything, so I designed the strap to not have to be sewn at any point.

What I did was, I thought, pretty darned clever. The strap is one continuous length of elastic, melted at both ends. The strap’s middle is sandwiched between the two halves of the chest harness connector with two screws that serve the dual purpose of joining the halves, and anchoring the elastic straps.

Next, the straps go into two black plastic strap clamps on the backpack’s top half. Again, screws hold the parts in place as well as anchor the elastic strap to the backpack.

Then the elastic straps are stretched a bit and clamped again at the bottom half of the backpack with two more clamps, screwed into place.

The clever part here is that now the two straps are used to hold the control tablet in place, which has a seat slotted into the back of the backpack.

Then the straps go through strap adjusters and into the harness clasps. There is enough remnant strap to do a lot of adjustment for body size.

Then the harness clasps have a cylindrical peg that fits into holes on the harness connector, nice and snugly so the strap won’t come out, but not too tight to make removal difficult.

Here’s the Land Adventurer, with backpack on his back.

Here he has placed the backpack on the ground, deployed its legs, removed the control tablet and is ready to launch the drone.

I designed the backpack with a slot in the back to store the control tablet. When not in use, the tablet fits behind the two elastic straps. (Clever me!): 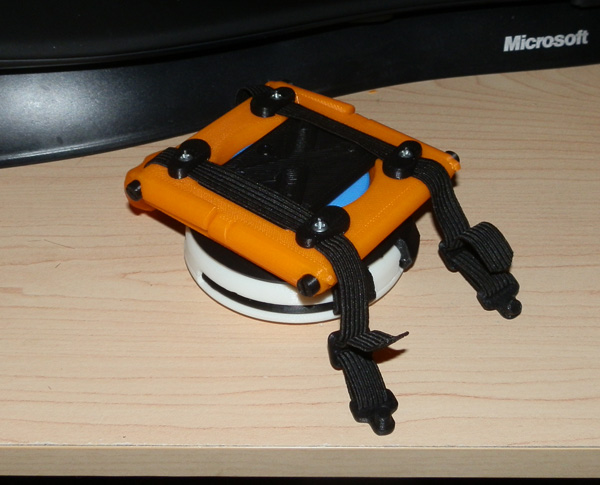 Here, you see the tablet being removed: 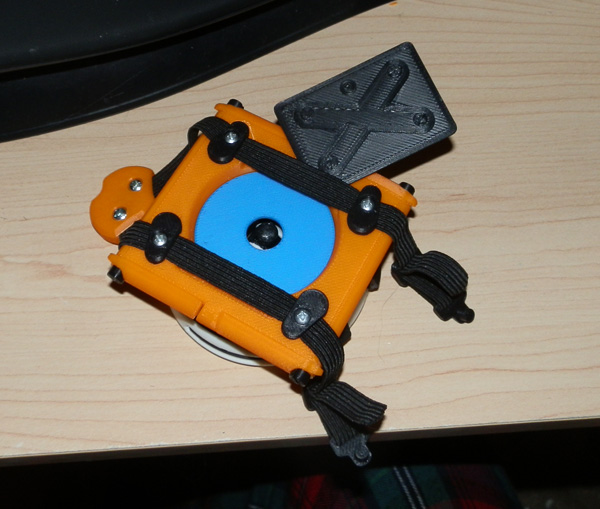 When the drone is launched, it exposes a solar panel to charge the internal batteries, to keep the drone powered: