GI Joe comes with a dog tag. Almost always have. It’s part of being a GI Joe. Hasbro began by mimicking dog tags used by soldiers during World War II, slightly oblong tin things with a small dent in them. 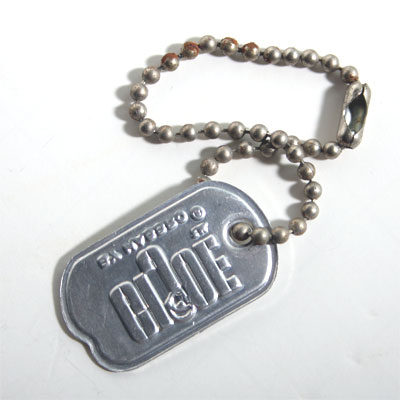 Here are a line-up of the dog tag as it has been used over the years since the originals (I regret I can’t show a photograph of an original, mine are all in storage. And I’m not even certain I have any vintage dog tags): 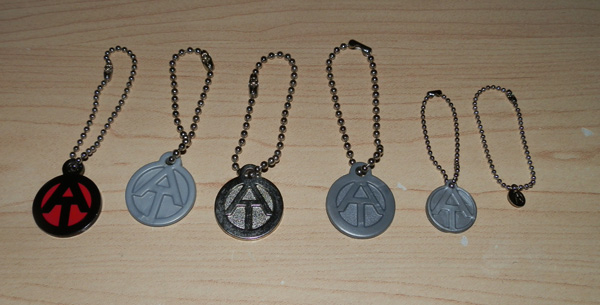 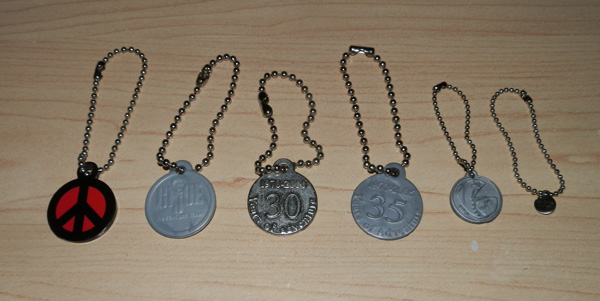 When Hasbro brought out the 30th Anniversary figures, they reproduced the original AT dog tag for the 12″ figures. The back of these had 1970-2000, 30 Years of Adventure on them.

Then when they brought out their Timeless Collection Adventure Team sets, many of these had a metal version of the dog tags.

The 35th Anniversary editions had 1970-2006, 35 Years of Adventure on their reverse sides. Some club exclusive figures came with a metal version of this one too.

The GI Joe Collectors Club created a smaller version of the AT dog tag to proper scale with the 12″ GI Joes. Those had the AT logo on one side, and the obverse was blank.

But what I find interesting is the Sigma Six Adventure Team line (three sets produced a few years back) had its own AT dog tag. It’s about 2/3 the diameter of the original, and the one I have here has a symbol on the back that may represent the cobra snake in the Snake Eyes “Pyramid of Peril” Sigma 6 Adventure Team set.

And for further fun and joy, the club created a very special figure in 2003 for the convention that had an Adventure Team GI Joe dressed as a hippie with bell-bottom jeans, platform shoes, a dashiki, a white T-shirt with shoulder holster and pistol. He was the Counterculture Joe, operating undercover.

One side of his AT dog tag was a beautifully colored (for the first time) AT logo, and on the obverse, a peace symbol.

This figure was making a number of inside jokes about GI Joe from the two-finger (toke) grip to the longer fuzzy hair (a ‘fro) to the idea that the AT logo was intended to look like the iconic peace symbol from the hippie years.

And now for the 50th Anniversary, the Club is creating a gold version of the miniature AT dog tag for the 12″ Adventure Team figure in the set. 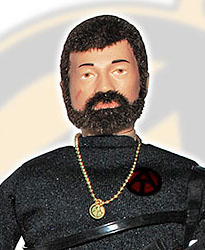 In the 1970s joining the GI Joe club (then run by Hasbro itself) could get you this special-edition dog tag. It is a child-sized dog tag and measures approximately 2″ across and was meant for the kid to wear. 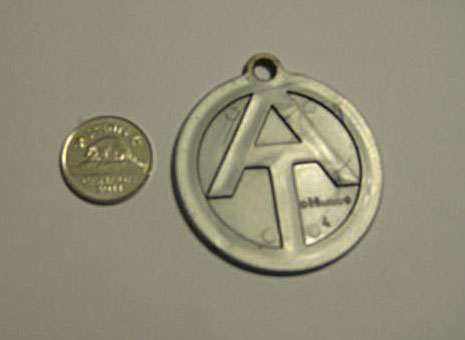 And last, this piece is a bit of a mystery. I can find no reference to it online but I managed to get my hands on it. This one measures just over 4″ in diameter and has a very large metal ball-chain.

It’s next to a metal 35th dog tag for scale.