When I first saw the movie TRON in the 80s, when it first came out, I was in love.

When TRON Legacy came out, I was a huge fan. This was likely the second most beautiful movie I have ever seen. Blade Runner comes first.

When the first TRON came out, I never had access to the toys. There weren’t many, but there were 3 Light Cycles with ripcord and heavy flywheel based on the concept of the SSP toys from the early 70s. And each could hold a figure. They made a few figures. But not many.

These exploded in value to the point that owning them was out of the question.

But when TRON Legacy came out, the toy stores were flooded with great toys, and man, I bought them.

I missed out on a few, but here’s a selection from my collection.

First is the Recognizer Carry Case for the die cast ships and cycles. Seen with the Baton. 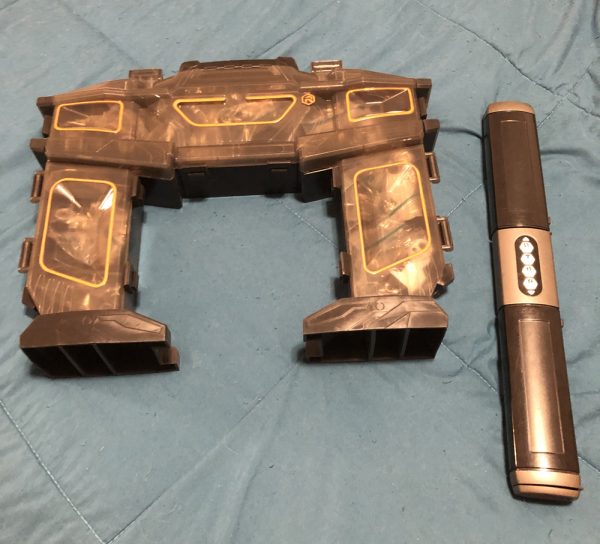 Open it up and spill the contents: 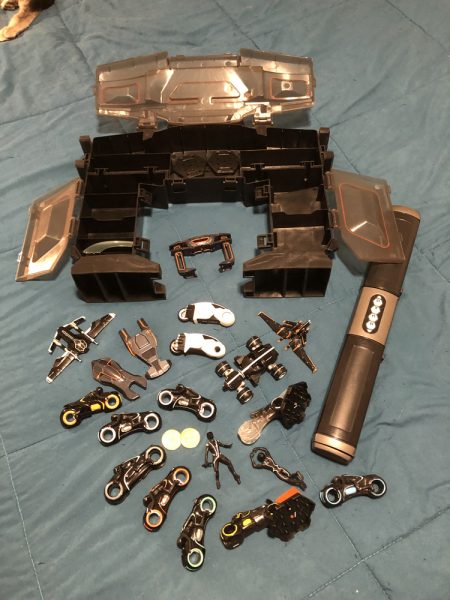 This is the set of die-cast ships and bikes from the film, stored lovingly in zip-loc bags to prevent damage, inside the Recognizer Carry Case.

There are a few interesting ones here. Included in this Cycle collection are a few exclusives. I’ll shoot better pics of them at some point.

One is a Walmart exclusive (a turquoise highlight bike) that came with a DVD set.

Two are from figure sets, one is sem-transparent, showing the transformation from bits to the fully-formed cycle. Another shows a streak from its back.

But the coolest: Two USB Thumb Drives. Each one has a swing-out USB connector, and when connected, they light up and make sounds from the film. 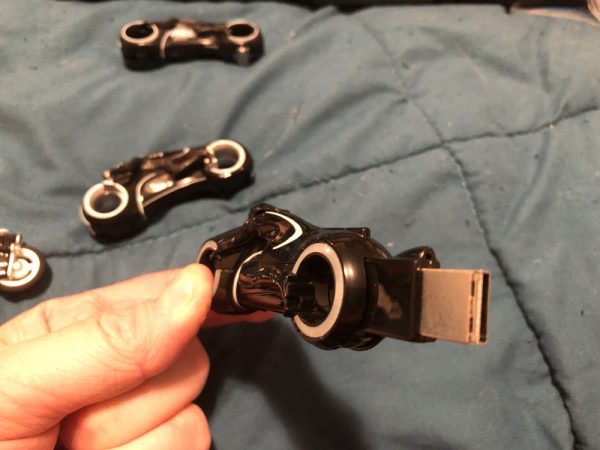 The Baton holds a spring-launched Light Cycle with little metal roller wheels. You pull open the baton which locks the spring, then close it to compress it and launch the cycle from one end, which is a hinged door. Pretty cool. 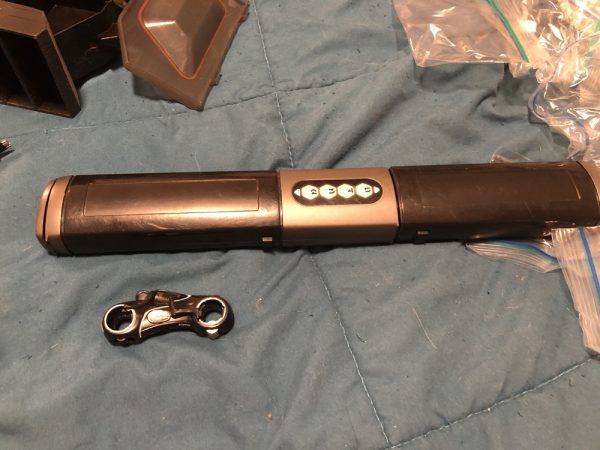 In a later post I will post pics of the larger Light Cycles that came with 4″ figures, and some of the figures I have, as well as the Light Jets, and even some larger figures, including two 12″ figures with light-up faces which switch expressions. Those come with die-cast metal accessories which are top-notch.

I also got two FLYNN’S ARCADE tokens from Disney, on eBay. 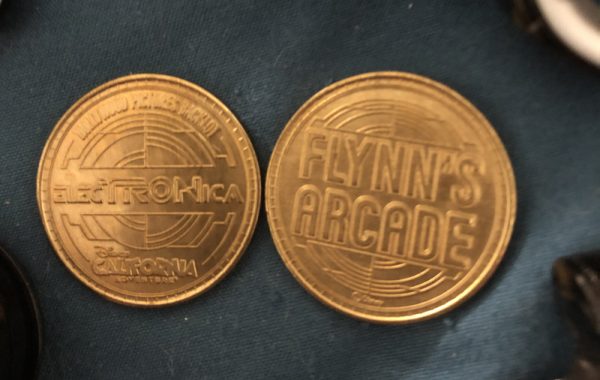 Over the years I stumbled upon a couple of interesting oddities.

The first is an Atari joystick designed for the TRON game, and designed after the joystick from the TRON Arcade Game: 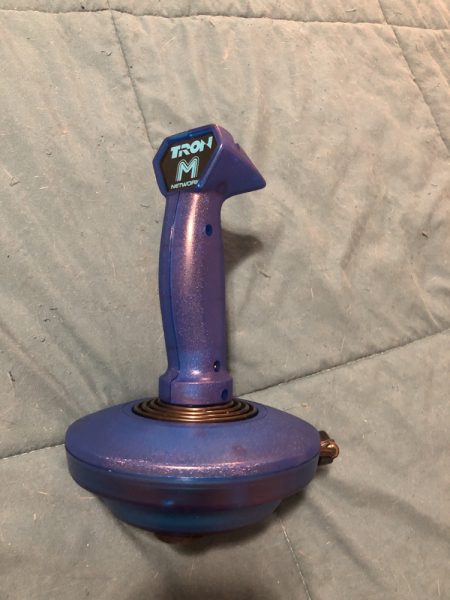 And here’s a figure from TRON put out in limited edition of 1600. Packaged in a fairly decent replica of an arcade cabinet, the figure inside lights up: 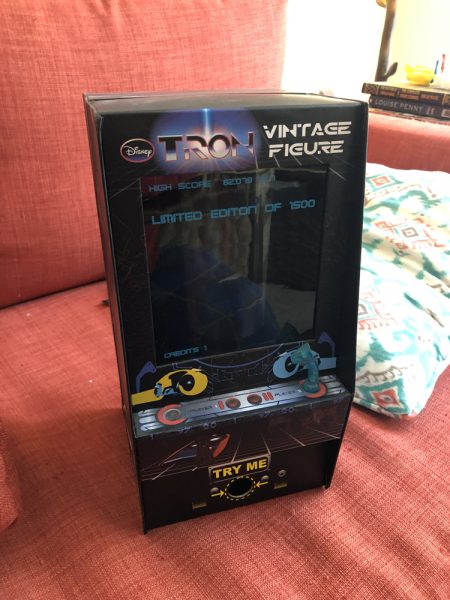 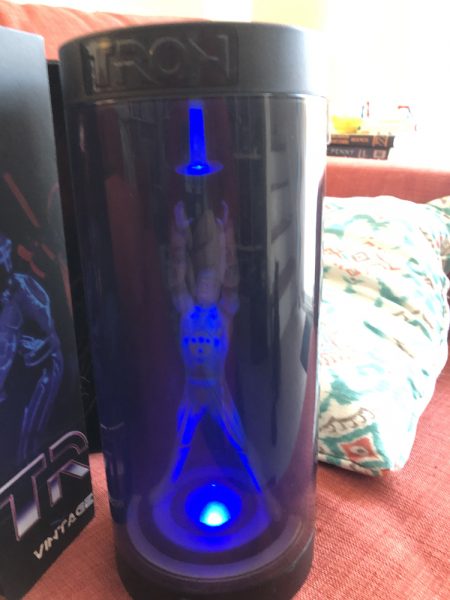 The dark cylinder cover also comes away, and you can see the figure much better without that heavy tinting.

Here are the larger Light Cycles from TRON Legacy, along with one of the NECA Light Cycle Reproduction with figures that came out around the time of Legacy’s release. The ripcord is in a bin with the others. 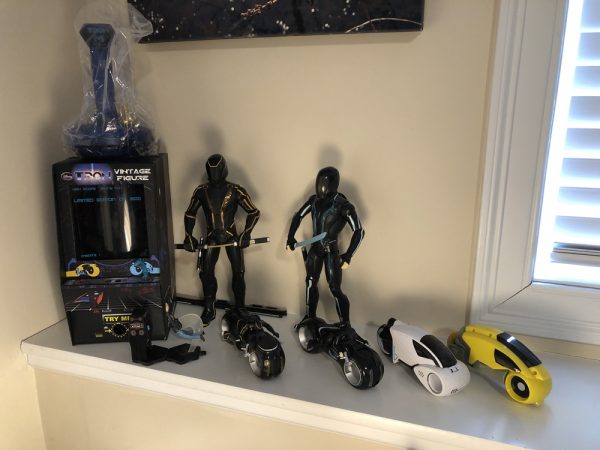 Also, hard to see here is a small figure set of Sam Flynn flying into a TRON Arcade Cabinet.

Also, there you can see Sam Flynn and CLU as 12″ figures. Their accessories are metal, and the baton sticks to the thigh by magnet. No batteries right now, but their faces light up when activated, and we see the faces change through some kind of flip-projection tech. Not sure quite now, but it’s cool. Will replace batteries and shoot some video later.

2 thoughts on “TRON – My Obsession”