In the winter of 1978 several whales became trapped under the ice in Hall’s Bay, Newfoundland, on which lies my hometown of Springdale. Several humpbacks and a rare Narwhal. Rare, because they are high arctic whales, and rarely get this far south.

Throughout the winter, locals kept a large hole open so the whales could breathe. In the spring, an ice-breaker came in to the bay close enough to the hole that the whales could escape. Not all of them survived the winter. The belief is that mid-winter, one made a run for it, but Hall’s Bay, while being very deep, is also very long, and one humpback was found dead. The rest, though, we believe survived. They were gone the day after the ice was opened up.

“Springy”, as some of the locals called this young Narwhal, whose tusk was not yet fully formed.

One one particularly nice day, Carol skated out on the perfectly smooth ice, and spent some time with the whales. It was amazing. My friends and I skated out there as well on a different day. Here we were, mere feet from the edge of this twenty-foot-diameter hole, and these whales kept coming up and getting air. The big humpbacks made a show of it, but the little Narwhal would kind of surface quietly, we’d get a glimpse of her, and then she’d dip silently down into the water again.

Carol wrote a poem about the experience, which has been published multiple times, and is one of my favorite poems of her large body of work. The poem was called “Narwhal”.

Hall’s Bay is a china plate.
I skate far out to the breathing hole
where the men chop the ice away.
The echo of auger and axe
grapples the lip of hills.
They are building a lung for whales –
a pair of humpbacks, a narwhal
surfacing through the slush.
The little narwhal lingers,
mottled back steaming.
Its eye oily in the dark cup,
me mirrored in the eye-slick,
the horn spiraling into brittle air.

On her birthday in 2010, I gave her this installation, which hangs on our wall in our new house, at the base of the stair under a tall window. (Seen here in our apartment previously) 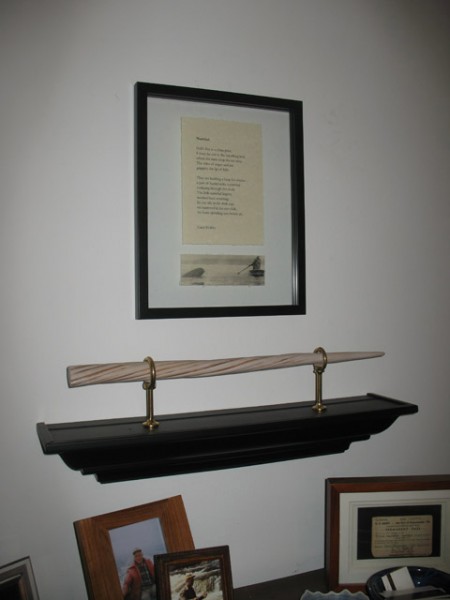 I framed a copy of her poem, with a print of Springy the whale. Under it is a shelf with brass brackets holding about 18 inches of a narwhal horn. Not a real one of course. That would be priceless. This is a casting in dental polymer of a real one, one of a rare few that someone was lucky enough to get a full casting of. (They also make available a 5 foot version.)

Last year, after our 24th Anniversary, I realized that the next one would be the big 25. Silver. I began thinking almost immediately what to get Carol for our 25th Anniversary that was silver.

At the time I had printed some things at Shapeways, an online 3D printing service. They keep adding materials and services, and at some point they introduced 3D printing in precious metals. They print the item in wax, then use the centuries-old lost-wax casting process in whatever metal you like, including solid gold and platinum.

So this was perfect. I would create a silver narwhal for her.

As time was getting on mid-year and I found myself with little time for 3D modeling and printing, I searched the web for models that would suit. I found a whale model that was very similar to a narwhal (without the horn) and downloaded that.

I found a splash model (as part of something else) and separated out the water splash.

I created the base myself (a simple oval, with an indented bottom, and an inscription.)

I smoothed out the whale, because I thought that in the Shapeways preview software that the facets of the original model would be noticeable in metal, and posed the whale in the water base I had created, using a boolean subtract to remove the bottom of the whale.

Here is a test print I did on my own printer. 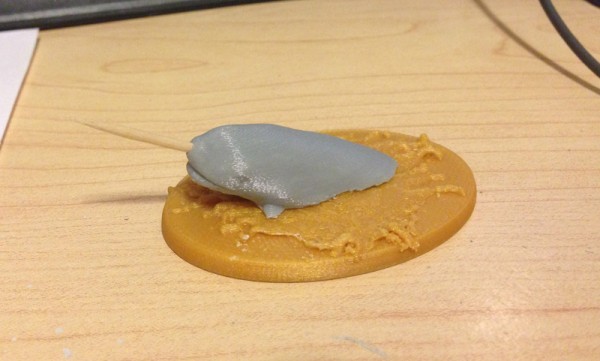 The horn is a simple standard toothpick. It works!

I then cut some interior space out (waste of silver) and sent it away to Shapeways for a silver print. I had the option of raw or polished. I felt the whale should be polished, shining as if coming up from the ocean, covered in water.

This wasn’t cheap, and I was nervous at how it would turn out, being my first metal print. 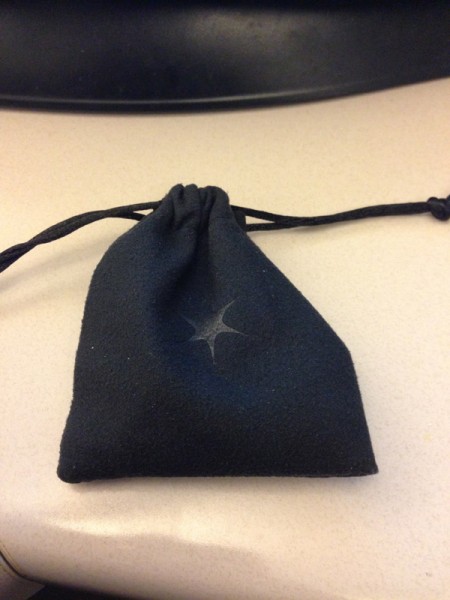 In a nice, soft microfiber bag to keep it safe.

And then I opened it:

I couldn’t believe how it turned out. It was perfect! 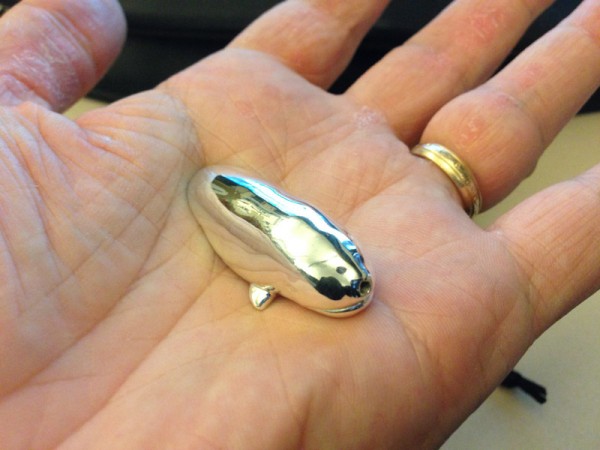 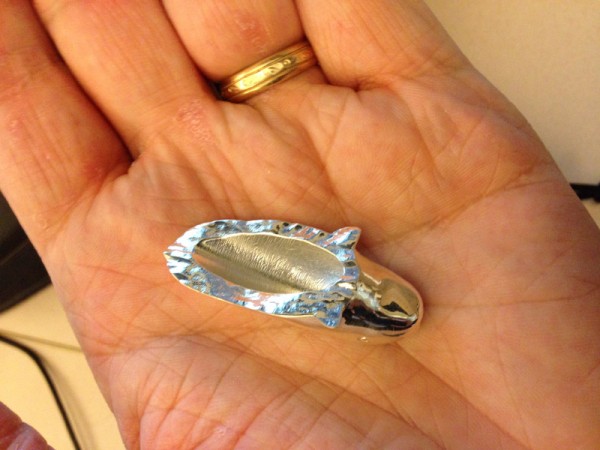 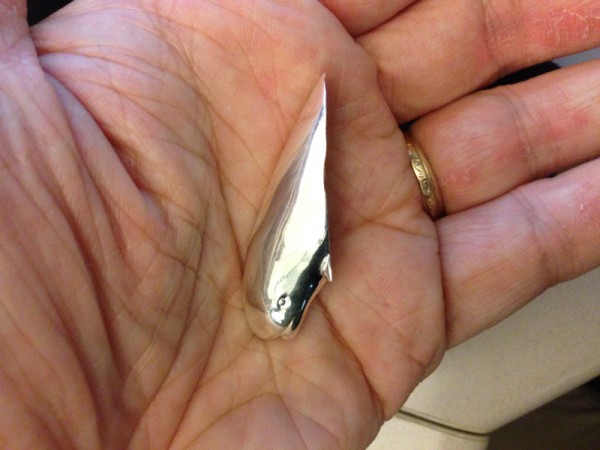 Emboldened with confidence, I sent for the base to be printed in raw bronze. I opted not to have it polished. Two polished metals in the same piece would be harder to see. The two shiny metals would compete with each other for attention.

I forgot to photograph the base separate, but it turned out very nicely. I was worried because a portion of the wave was suspended above the water, very thin, splashing out past the base itself, and my own printer had issue with that. Shapeways printing, however, did not. It was great.

Here is the base’s bottom, with inscription: 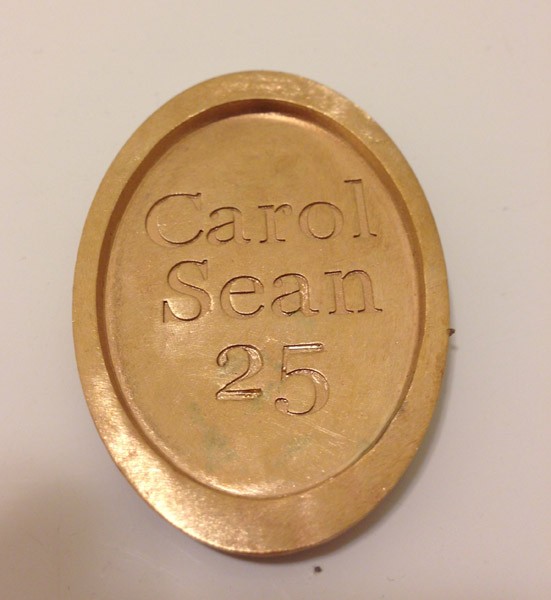 So I used a binary clear epoxy to bind the pieces together:

Then I used my Dremel to carve a spiral into the toothpick, then stained it with the same stain we have on our front porch, which Carol and I put down this summer.

I varnished it, and used binary epoxy to attach the horn.

How best to present this? I thought it should come in a box, like a piece of jewelry, but not have her expect jewelry. A cubic box I found at Michael’s Craft Store would do the trick: 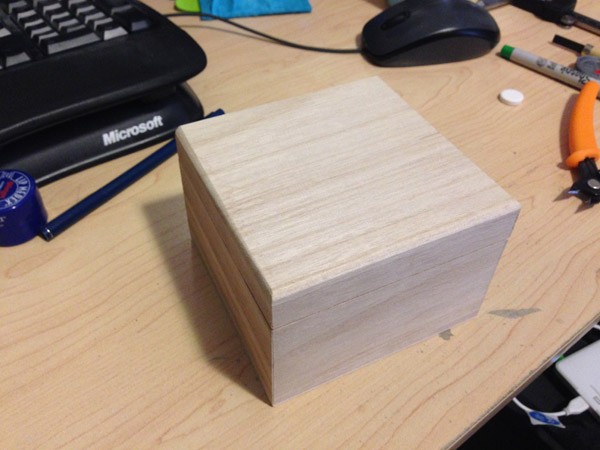 This one has a magnetic clasp, and a deep interior: 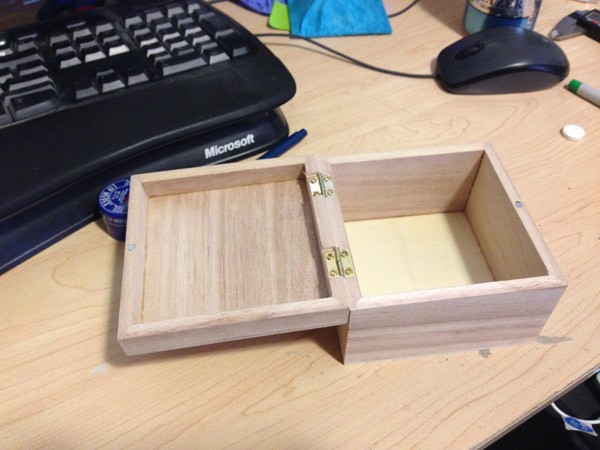 So I stained this box in the same stain we have on our back deck, which Charlotte, Carol and I did early in the summer: 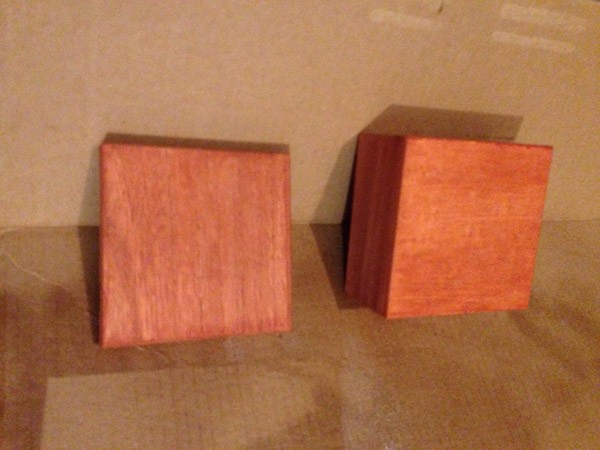 And a few coats of semi-gloss satin varnish. 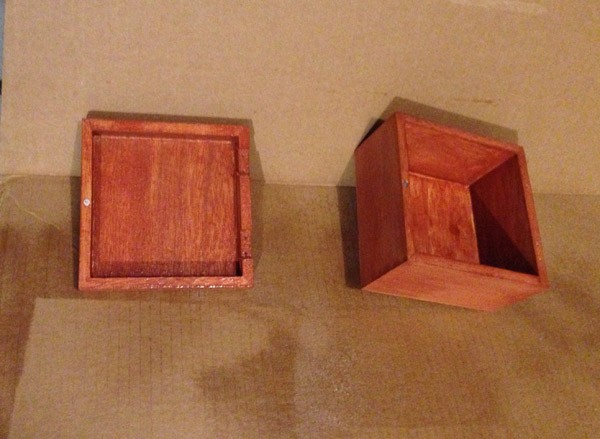 So I used my own 3D printer to create an insert that had a perfect inset for the base: A quick test print for fit: 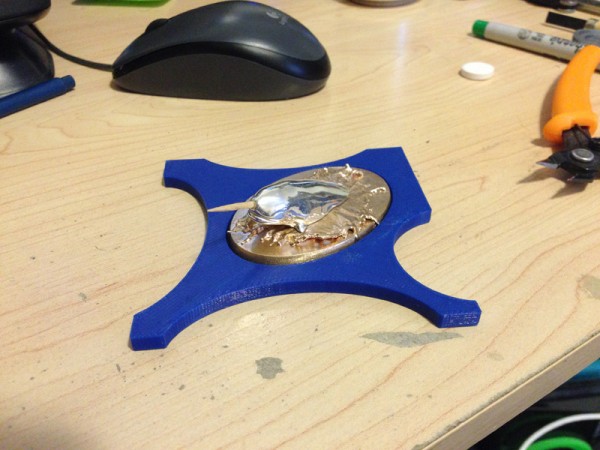 And then I printed the full insert, much thicker.

And then what? I had decided to cover it with some kind of fabric, and I had only to decide what. I found this nice watery blue batique at Michael’s, and cut it to shape and wrapped it around my insert:

I used a spray adhesive, and an elastic to keep it in place while it dried.

Then I used a plastic version of the base and a clamp to push the fabric into the aperture I had cut:

Testing it with the final piece showed it would work perfectly: 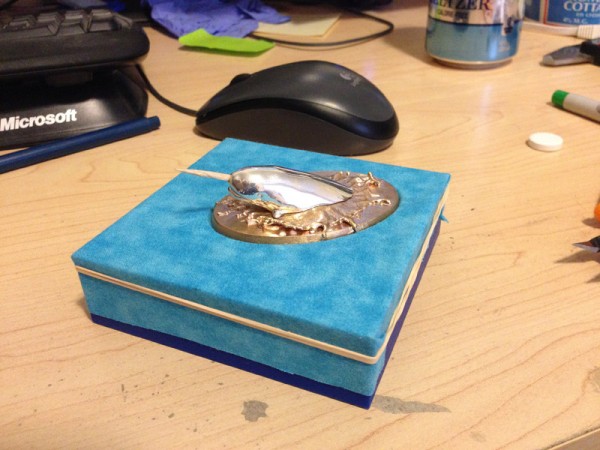 But it would still flop around the box, (which would not be good, and might, indeed, break the wooden horn.)

So I 3D printed another part that would fit inside the cover of the box and hold the whale down while the box was closed: 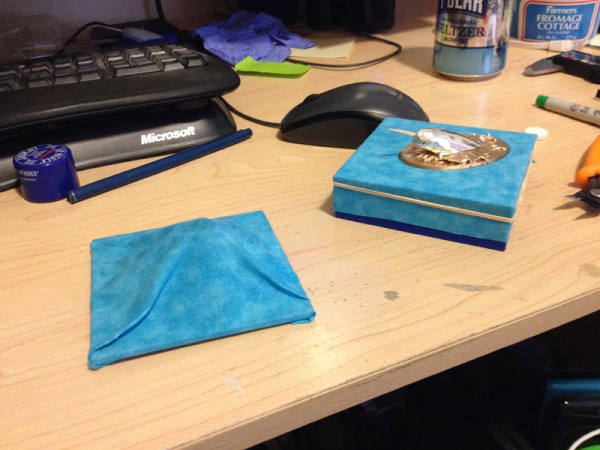 I used an oval cylindrical shape, and then used the actual whale model (in 3D) to cut out a part of it that would ensure it fit down exactly over the whale’s back and clamp it down while the box lid was closed. It could go nowhere: 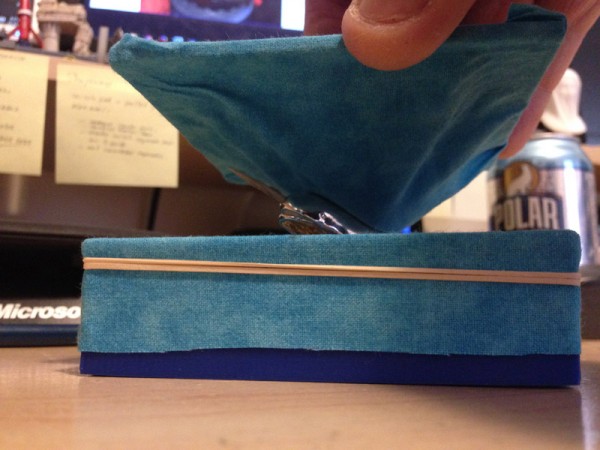 Used contact cement to glue these inserts firmly into the box. I used a stand-in piece in place of the metal final work, and held the box closed with a clamp while the inserts dried in place: 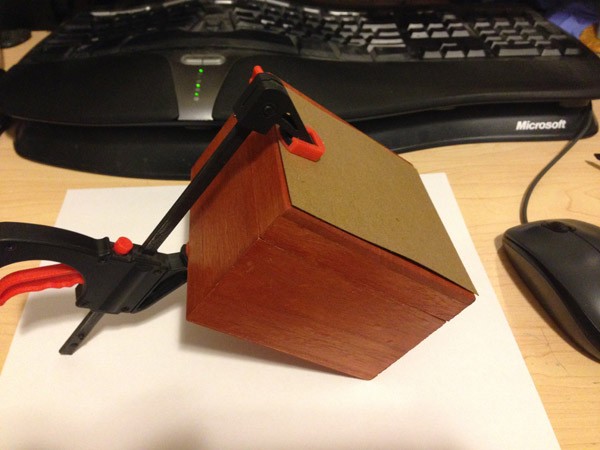 And this is what it looked like when finished:

But that was not all. I needed a finishing piece: A silver engraved plaque. I went to Things Engraved in our local mall and got the perfect oval silver plate and had engraved on it: “For Carol On Our 25th Anniversary, Love, Sean” 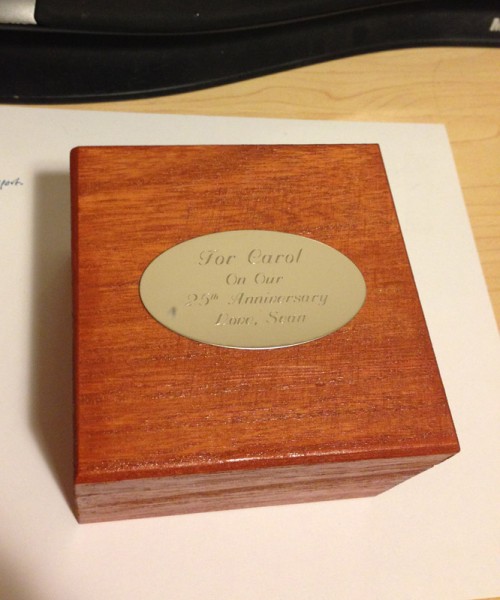 And that’s the complete package.

I gave it to her on our anniversary and she loved it.

Last year I worked on a second project for Cotswold Collectibles. The first one was the smaller aerial drone, which they wanted to fit in their lovely cloth backpack, for a Deluxe Midnight Mission Set.

The second one had to do with retrieving lost treasures from a buried tomb in a set called Descent Into Danger. Here are photos shot for the catalog:

My part of the project involved creating a working winch and hook. So I did some research and saw that modern winches have motors attached, so I opted to create a working winch, with ratchet gear, and the winder (which works by hand) winds what looks like a motor, but is actually a crank.

Greg, my friend at Cotswold, wanted it to mount on top of a table-top camera tripod, which is coincidentally perfect for a GI Joe-scaled winch tripod. It tilts, has extending legs, and screws on using a standard mounting screw.

So I designed the base of the winch to hold a nut that would fit that screw tread, so it could be screwed on tightly. 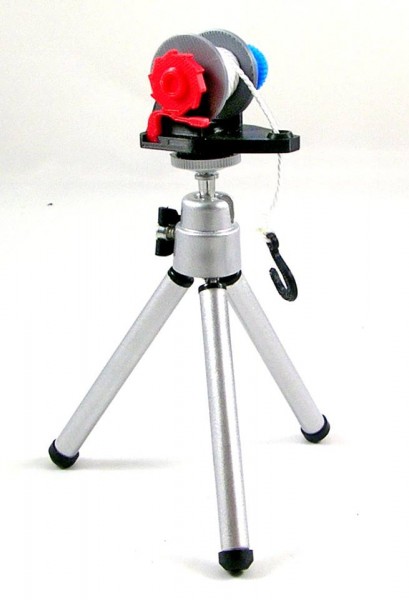 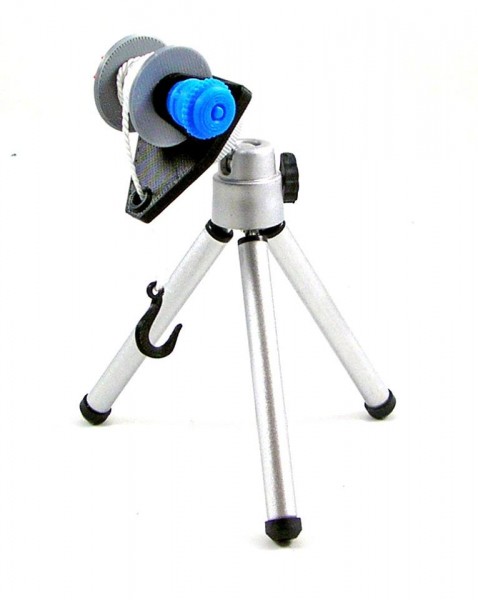 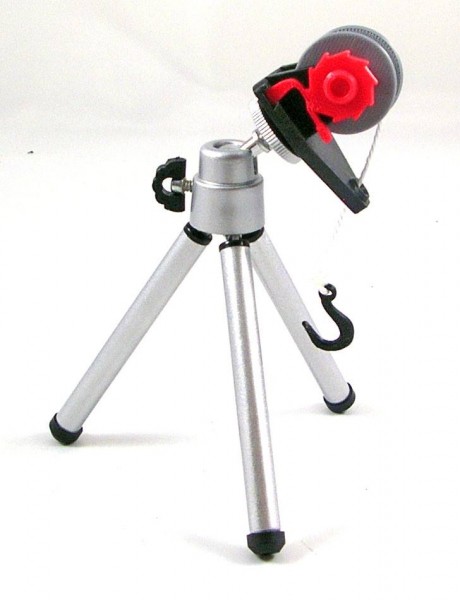 The ratchet works by a springed gear stop (in red) which was printed to be flexible. You turn the motor (the blue piece) and the winch cranks upward, and doesn’t go back down unless you press on the red lever, which frees the winch gear.

I confess I was a little surprised how well it all worked.